The TCB Shear Stud is used in composite structures and uniquely conforms to the standards for preloaded bolts as well as shear studs:

TCB Shear Studs are typically used on composite bridges where the steel is being strengthened with concrete being poured from above. 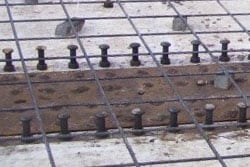 The shank of the bolt protrudes above the steel to become a Shear Stud, and the dome head of the TCB more readily accepts the concrete when compared to a hex headed stud.

Bridge engineers can also factor in their designs the greater bearing surface of the TCB dome head to mitigate against uplift.

To request a quote or for more information about our products, please contact us.