The TCB Stud is used where access is restricted and returns the same preload values as standard a TCB. The left-hand threaded nut replaces the conventional bolt head; this allows the stud to be inserted into a clearance hole first and the LH nut is screwed onto the stud afterwards.

All TCB Studs from Tension Control Bolts Ltd are:

TCB Studs can be used wherever access is restricted. The stud is simply inserted through the steel and then the left-hand threaded nut (denoted with an embossed arrow on the nut) is threaded onto the left–hand threaded section of the stud. 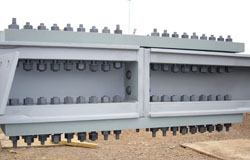 The distinctive curved design of the steel roof from the 2012 Olympic Games Aquatic Centre utilised 20,000 TCB Studs as the design had not initially factored in access for the shear wrenches.

Further, there were space limitations; angling a dome headed bolt through a hole requires several more clearance in the web whereas TCB Studs can be inserted from above or below to suit access and facilitate installation.

In the wind energy market TCB Studs have been incorporated into new bolted shell tower designs for leading manufacturers Siemens Gamesa and Lagerwey, and TCB Studs are also frequently used in high rise and rail applications.

To request a quote or for more information about our products, please contact us.